Cappadocia tour is a must for travellers.The region is very Wide and far from eachother there are lots of places to see in the region  easiest way to visit cappadocia is joining regular guided tours also renting car will be good idea bt it will be the expensive way. You can see some regular tour programs below

09:30 We will pick up you from your hotel or office for Full Day North of Cappadocia Tour.

In this day you will be able to see:

After the tour, you will be transferred back to your cave hotel & Overnight at cave hotel

09:30 We will pick up you from your hotel for Full Day South of Cappadocia Tour.

In this day you will be able to see:

After the tour, transfer to Kayseri airport. 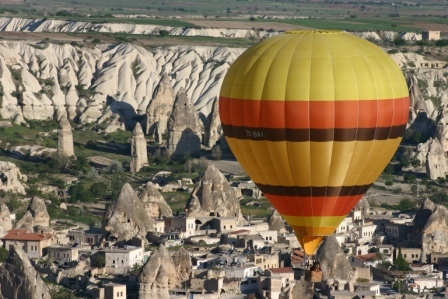 Our sunrise flights are scheduled seven days a week, 365 days a year, weather permitting. We meet one hour prior to sunrise and then travel to one of our many launch sites. Inflation takes about 20 minutes and then we are airborne!

The flight is approximately one hour and we will ascend anywhere from rock formations to several thousand feet. Once you're airborne your pilot will point out the spectacular sites of Cappadocia, from Red Valley to the Goreme and vineyards, to rock formations absolutely beauty of the nature. Our flying area has many wonderful things to see.

Once we have landed and the balloons are stored away we prepare for our Traditional Champagne Toast. Non-alcoholic beverages are also available. We will then transfer you to your hotels. Our passengers are then presented with a Flight of Ascension certificate by their pilot

Includes : Pick up and Drop off Hotel,Insurance,and taxes