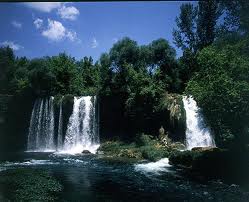 Antalya, Turkey's principal holiday resort in the Mediterranean region (ancient Pamphylia), is an attractive city with shady palm-lined boulevards, a prize-winning marina on the Mediterranean. In the picturesque old quarter, Kaleici, narrow winding streets and old wooden houses abut the ancient city walls. Lately, many foreigners have bought (and continue to buy) property in and around Antalya for their holidays or for the retirement. It became a popular area especially for the German and Russian nationals.

Since its founding in the second century B.C. by Attalus II, a king of Pergamon, who named the city Attaleai after himself, Antalya has been continuously inhabited. The Romans, Byzantines and Seljuks in turn occupied the city before it came under Ottoman rule. The elegant fluted minaret of the Yivli Minareli Mosque in the center of the city built by the Seljuk sultan Alaeddin Keykubat in the 13th century has become the Antalya's symbol. The Karatay Medrese (theological college) in the Kaleici district, from the same period, exemplifies the best of Seljuk stone carvings. The two most important Ottoman mosques in the city are the 16th century Murat Pasa Mosque, remarkable for its tile decoration, the 18th century Tekeli Mehmet Pasa Mosque. Neighboring the marina, the attractive late 19th century Iskele Mosque is built of cut stone and set on four pillars over a natural spring. The Hidirlik Kulesi (tower) was probably originally constructed as a lighthouse in the second century. Today a church, the Kesik Minaret Mosque attests to the city's long history in its succession of Roman, Byzantine, Seljuk and Ottoman renovations. When Emperor Hadrian visited Antalya in 130 A.D. a beautifully decorated three arched gate was built into the city walls in his honor.

For visiting Antalya we offer you  2 Daily city tours in Antalya. Side perge Aspendos tour and  Daily tour to Thermessos