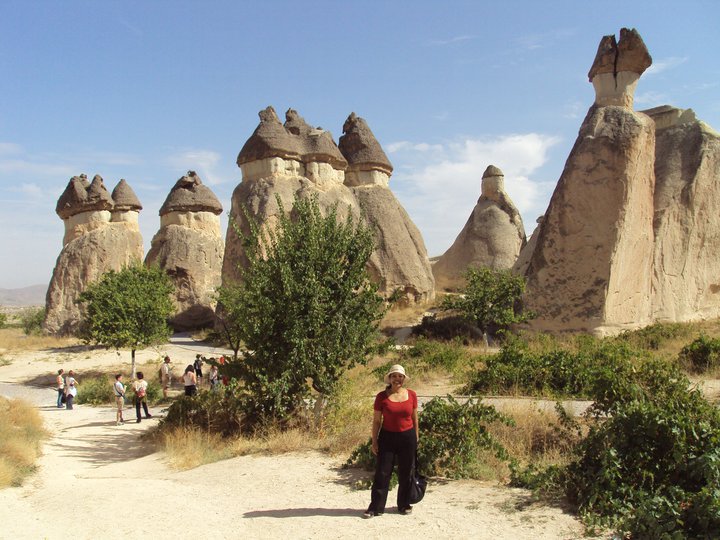 The region known in ancient times a cappadocia is the setting for some of nature’s most bizarre wonders. It incorporates the provinces of Nevşehir,Nigde, Aksaray, Kayseri and Kirsehir. For most people ,the name Cappadocia suggests the towns and vicinities of Goreme, Urgup, Avanos, Uchisar, Derinkuyu, Ihlara and Kaymaklı, where in the course of millions of years the land has been shaped into fantastic forms. Fair chimneys that seem haunted and cities and houses of worship that extend many meters deep into the earth are all enveloped in an atmosphere that is ethereal and unwoldly.

In an extraordinary meeting of nature’s artistic splendor and humankind’s resourcefulness, Cappadocia is one of those rare places that must be experienced at least once in a lifetime. With soaring rock formations, splendid walking trails, uniquely-rippled landscapes, mysterious underground cities and rock-cut churches, Cappadocia is the must-see destination in Turkey.

Visiting Cappadocia;
There are so many fascinating things to see in Cappadocia that you could spend a lifetime here and still discover new places. The main 'must-see' attractions are the two large open-air museums and the best of the underground cities. However, there are also many small, all-but-forgotten rock-cut churches and monasteries, splendid hiking trails, several spectacular caravanserais and many dramatic rock formations well worth going out of your way to visit

Cappadocia region is easily accessible from all parts of Turkey. Once here you can easily comfortably explore all the highlights and the hidden gems that this area is known for. By far the best introduction to Cappadocia is gently floating above the rippled landscape in a hot air balloon. Known world-wide as one of the best places to fly hot air balloons, you will glide just above orchards, between the famous fairy chimney rock formations and up and over the rippled ravines. Alternatively, saddle up and travel like the first European explorers and the Scythian nomads on horseback through the many trails and valleys. The valleys and villages of Cappadocia are also easy to explore on foot. We offer several guided hiking tours as well as daily tours (private and group) to see the highlights of the region.