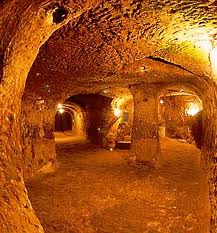 Underground Cities? These troglodyte cave-cities were excavated as early as Hittite times, and expanded over the centuries as various marauding armies traversed Central Anatolia in search of captives and plunder. There are 36 underground cities in Cappadocia and the deepest one is Derinkuyu underground city, while the widest is the Kaymakli Underground City.

The Derinkuyu underground city is located in the same named town Derinkuyu, which is situated 40km from Goreme (30 minute drive). There are about 600 outside doors to the city, hidden in the courtyards of surface dwellings. The underground city is approximately 85m deep. It contains all the usual rooms found in an underground city (stables, cellars, storage rooms, refectories, churches, wineries etc.) Apart from these, a large room with a barrel vaulted ceiling on the second floor was a missionary school, the rooms to the left being study rooms.

From the 3rd and 4th floors onwards the descent is by way of vertical staircases which lead to a cruciform plan church on the lowest floor.

The 55m deep ventilation shaft was also used as a well. Not every floor was provided with water wells up to the surface in order to protect the dwellers from poisoning during raids. Derinkuyu contains at least 15,000 ventilation ducts that provide fresh air deep within the underground city. The Derinkuyu Underground City was opened to visitors in 1965 but so far less than half of it can be visited.

It is unlikely that the underground cities were ever intended for permanent dwelling, or even long stays, but they were clearly built to withstand attack and could support large numbers of people and their domestic animals, for extended periods of time. The urban organization was very complex, and there was probably always work in progress.

The extensive networks of passages, tunnels, stepped pits and inclined corridors link family rooms and communal spaces where people would meet, work and worship. The cities were complete with wells, chimneys for air circulation, niches for oil lamps, stores, water tanks, stables and areas where the dead could be placed until such time as conditions on the surface would allow their proper disposal. Most importantly, carefully balanced moving stone doors, resembling mill stones, were devised to quickly block the corridors in the event of an attack. Of course, these doors operated from one side only!