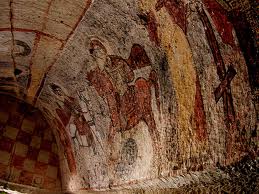 Who knows how many churches and chapels are hidden in the Cappadocian valleys? The best-known may be inside the Goreme Open-Air Museum but wherever you go you will find other churches - and often you will have them completely to yourself.

At the Cavusin old town, the church of St. John the Baptist rises on top of the hill. The church was built in the 5th century and it is the biggest cave church of Cappadocia even though it was divided into three rooms in 10th century against danger of collapsing. Most of the frescoes of St. John the Baptist church are faded by smoke but there are still some visible ones. Its cathedral-like proportions are also astounding.

Cavusin (Nicephorus Phocas) Church: This barrel-vaulted church, with one nave and three apses, is situated 2.5km from Goreme on the Goreme-Avanos road. Its narthex is collapsed. The church was built around 964/965.

Scenes:
On the vault are the Annunciation, Visitation, Proof of the Virgin, Flight into Egypt, Joseph's Dream Ii, Blessing and Mission of the Apostles, Adoration of the Magi, Massacre of the Innocents, Pursuit of Elizabeth, Killing of Zacharias; on the west wall are Entry into Jerusalem, Raising of Lazarus, Healing of the Blind Man, Descent from the Cross, Women at the Tomb; on the wall of the apse the Transfiguration; on the north apse Emperor Nicaphorus Phocas and his family, which held power and authority in Cappadocia.
Rose Valley and Red Valley connecting Goreme to Cavusin also has some cave churches decorated with frescoes. The most important ones are:
Uzumlu Church: The Uzumlu (Grape) Church is located at the beginning of the Red Valley, to the west of the town of Ortahisar, about 1 km from the road. The fairy chimney, in which the Grape Church is found, is hollowed out like a monastic complex where monks lived. The lower level of the fairy chimney is the church and the upper level is a chamber -which can be seen from outside due to the partial collapse of the walls- with a cross relief on the ceiling. The Uzumlu church has a square plan with one apse and one nave. At the far endof the nave is a grave niche. This church is also called The Church of St. Nichlitas due to the presence of an inscription of St.Nichlitas in the dedication inscription of the church. The nave with a flat ceiling is decorated with rich embelishments. The orange-colored surface is decorated with a cross composed of circles and rectangles and bunches of grape and geometrical motifs around it. The border is embellishments using medallions with Maltese crosses. Although it is not proven, the common belief is that this church dates back to the 8th or 9th century. Fresco Scenes in the Uzumlu (Grape) Church: On the apse the Enthroned Mary holding Baby Jesus and Archangels Michael and Gabriel by their sides, on the north and south sides of the nave twelve apostles and doctor saints.