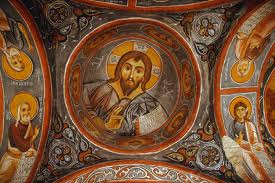 The Goreme Open-Air Museum resembles a vast monastic complex composed of scores of refectory monasteries placed side-by-side, each with its own fantastic church. It is obviously the first sight to be visited by any traveler in Cappadocia, standing as it does in the very center of the region with easy access from all directions. It is only 15 minutes walk (1.5km, 1 mile) from Goreme village center. It contains the finest of the rock-cut churches, with beautiful frescoes (wall paintings) whose colors still retain all their original freshness. It also presents unique examples of rock hewn architecture and fresco technique. The Goreme Open Air Museum has been a member of UNESCO World Heritage List since 1984, and was one of the first two UNESCO sites in Turkey.

The area covered by this Open Air Museum forms a coherent geographical entity and represents historical unity. There are eleven refectories within the Museum, with rock-cut churches tables and benches. Each is associated with a church. Most of the churches in Goreme Open Air Museum belong to the 10th, 11th and 12th centuries.
In summer, it is better to visit the museum early in the morning or late afternoon, instead of mid-day. There are many churches and chapels in Goreme Open Air Museum but the most important ones are:

This church is situated behind the rock housing Elmali (Apple) Church. It has a cruciform plan, with two columns. The north, south and west arms of the cruciform are barrel vaulted, and the center, the east arm, and the east corners are domed. There are a main, central apse and two side apses. Motifs were painted in red directly onto the rock. The walls and the dome are decorated in a variety of motifs including geometrical patterns, mythological animals and military symbols. The walls also have motifs resembling stonework. This church dates back to the second half of the 11th century.

One of the most prominent buildings in the area with its vivid colors, the church is a groin-vaulted structure with cross-in-square plan, having four columns and a central dome. It has beautiful frescoes dating to the 11th and 12th centuries. And where these have fallen off, you can see simple red-painted ornaments from the iconoclastic period. The frescoes are narrating scenes from the Bible and the life of Christ, the Hospitality of Abraham and Three Hebrew Youths. The building derives its name from the apple orchard collapsed a long time ago, in front of the main entrance.
Nunnery;
The 6-7 storey rock mass to the left of the museum entrance is known as "the Nunnery". The dining hall, kitchen and some rooms on the first floor, together with the ruined chapel on the second level, can still be visited. The church on the third storey, which can be reached through a tunnel, has a cruciform plan, a dome with four columns and three apses. The templon on the main apse is rarely found in Goreme's churches. Besides the fresco of Jesus, painted directly onto the rock, designs painted in red can also be seen. The different levels of the monastery are connected by tunnels, and "millstone doors", such as those found in the underground cities, and were used to close off these tunnels in times of danger.

Snake (Yilanli) Church
This church has a linear plan, consisting of two chambers. The front section is barrel-vaulted, while the back one has a flat ceiling. The red ochre ornaments imitate hewn stone plait. Frescoes dated to the 11th century, are painted directly on the wall. Opposite the entrance, there is an image of Christ with a book in his hand, and at his left, on both sides of a large cross, are Emperor Constantine and Helena. Right next to it, the Killing of the Snake by St. George and St. Theodore is depicted. On the opposite wall, Onophrios can be seen with a sapling in front of him, also the Apostle Thomas, and the founder of the building, St. Basileios holding a book in one hand and sanctifying with the other.
Carikli (Sandals) Church
This two columned church (two other columns being in the form of pillars), is cross vaulted, and has three apses and four domes. The well preserved frescoes show the life of Jesus, Hospitality of Abraham, and images of the saints and the donors of the church. Although it resembles both the Karanlik (Dark) and Elmali (Apple) Churches, the scenes of the Way of the Cross and the Descent from the Cross make this church different from the others. The figures are generally large. The footprints under the Ascension scene give the church its name, which means "with sandal". The church dates back to the end of the 12th and the beginning of the 13th centuries. The center dome houses a picture of Jesus the Pantocrator with the busts of angels in the insets. On the central apse is Deesis, on the north apse Mary and the Baby Jesus, and on the south apse, a picture of St Michael.

Dark Church (Karanlik Kilise)
The entrance to this church is from the north through a winding tunnel which opens into a barrel-vaulted narthex. You have to pay an extra admission fee (8 TL per person) but it is surely worth it. In the south of the narthex there are three graves, two of which are big and the other, small. The church has a cross plan, the arms of the cross having a diagonal vault. The templon of the main apse has been destroyed. This Church dates to the end of the 12th century. Some of the scenes on the walls are Deesis, Annunciation, Journey to Bethlehem, Nativity, Baptism, Raising of Lazarus, Transfiguration, Entry into Jerusalem, Last Supper, Betrayal of Judas, the Crucifixion and Anastasis.

Buckle (Tokali) Church
Even though Tokali church is located down the museum around 50 meters, you can visit the church with the same ticket that you used for Goreme Open Air Museum. It is a complex made up of 4 main chambers. The entrance to the New Church having a rectangular plan with longitudinal axis is made through the barrel-vaulted single-naved Old Church. This rock settlement is divided with arches into three sections. Containing the most important samples of paintings, the building has been decorated in various periods.

In the Old Church section, frescoes dated to early 10th century, painted in bands of rich red and green, represent scenes from the Bible. The indigo dominating the main chamber frescoes in the New Church, is a feature discerning the structure from the others. Among the rock churches in Cappadocia, Tokali has the best paintings narrating the life of Christ in the most detail. The church is decorated with the Infancy (childhood of Christ), Ministry and Passion cycles, with several episodes from the life of St. Basileios.