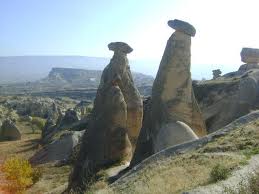 Ihlara Valley (often misspelled as Ilhara Valley), near Mount Hasan and Mount Melendiz (two of the three volcanoes of Cappadocia) is a canyon with a depth of approximately 100m and was formed by the Melendiz River thousands of years ago. It begins at Ihlara village and ends with Selime Monastery at Selime village after making 26 bends along 14 kilometers.

It is believed that the valley housed more than four thousand dwellings and a hundred cave churches decorated with frescoes. Around eighty thousand people once lived in Ihlara Valley.
{jcomments on}

There are 4 entrances to Ihlara valley. The first one is at the start of the valley in Ihlara Village. The second one opens to the 4th kilometer of the valley and it is the most popular entrance, and has more than 300 steps down to the valley. The third entrance is Belisirma village which allows you to enter the valley by driving. It is located in the middle (7th km) of the valley. If you will visit the valley by your car, this is the best spot to park your car. Belisirma has also some restaurants by Melendiz River to have lunch. Most of the guided tours end their walking here after lunch. The last entrance is the end of the valley at the Selime Monastery. Some of the trekking tours which walk the whole valley start from this end. The best part of the valley is the first 7km part from Ihlara Village until Belisirma Village where you can see most of the churches and natural beauty.

It is very pleasant to walk through the Ihlara valley by the vineyards, poplars and pistachio trees to the soothing sound of the rushing water (Melendiz River), and surrounded by a rich wildlife of lizards, frogs, butterflies, birds and sometimes eagles and other mammals like lambs and sheep.

There many cave churches in Ihlara Valley. Most of them display scenes dissimilar to the scenes depicted in other Cappadocian churches. In fact, they are reminiscent of the early churches of Syria and the Coptic churches of Egypt. The texts in Ihlara churches are unusually long.

Some of the most important churches in the Ihlara Valley are:

Kokar Kilise (The Smelly Church)
The Kokar Kilise (The Smelly Church) is located in the first quarter of the valley between Ihlara Village and main entrance. It can be entered through a ruined apse. The original entrance has been blocked by a landslide. There are many frescoes covering the walls of Kokar Kilise. On the left side, you can see the Annunciation, the Visitation, the Proof of the Virgin, the Nativity and the Adoration of the Magi scenes. On the right, you will see the Last Supper, the Betrayal, Jesus being Led Away, Jesus before Annas and Caiaphos, the Crucifixion and the Entombment. On the door facing the entrance there is a Deesis above, with scenes of the Flight to Egypt and The Last Supper below was badly damaged when openings were made at a much later date for windows and a door leading into the burial chamber. On the ceiling you can see the Ascension and the Pentecost together with a large Greek cross with the hand of God giving benediction in the center. On each side of the lower parts of the vaulting there are frescoes depicting the apostles standing and seated.

Purenli Seki Kilisesi (Church with the Terrace)
Purenli Seki Kilisesi is also located in the first quarter of the valley, around 100m from Kokar Kilise. You have to climb about 25m above the level of the river. It is composed of an entrance, a burial chamber and a double naos, separated by pillared arcades, each having an apse. The church is covered by frescoes classified as "archaic" but characterized by exquisite details, a strong sense of design and amazing freedom of expression.

Agacalti Kilise (Church under the Tree)
When you turn right at the bottom of the stairs from the main entrance, you will find yourself 10m from the church. Prepare yourself for a surprise when you enter the church through the ruined arch for a totally different style of architecture. This church is quite different from the other churches of the Byzantine world of the 10th and 11th century Cappadocia, with its harmoniously contrasted colors of red, green and yellow, the subjects of its paintings and its decoration of flowers, rosettes and checkerboard patterns, all betraying strong eastern influence. The Church, also known as the Church of Daniel or the Church of Pantassa, has a free cross architectural plan.

On the wall opposite the entrance there is a fresco of Daniel in the Lion's Den. The left cross-arm contains the Annuciation, the Visitation, the Nativity and the Magi. The right cross-arm contains the Flight into Egypt, the Baptism and the Dormition. The Dormition of the Virgin (Koimesis) is unique as far as Cappadocia is concerned. It is composed of two scenes. In the first scene, Mary is lying on a bed, with Christ accompanied by St. John sitting on one side of the bed to recover her soul. In the upper scene Christ is shown holding his Mother's soul, with an Angel behind him.