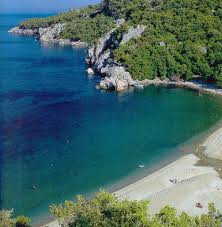 Though a very ancient city nearby Antalya, in the Mediterranean coast of Anatolia, the early history of Olympus is shrouded in mystery. Its name is probabily derived from Olympos (Tahtali) mountain about 15 km north of the city. We know it was an important Lycian city by the 2nd century B.C. because Strabon mentioned that Olympos had 3 votes in the Lycian League. The Olympians worshipped Hephaestos (Vulcan), the god of fire. No doubt this veneration sprang from reverence for the mysterious site of Chimeira, an eternal flame which still springs from the earth not far from the city. The town declined in the 1st century B.C. when it was controlled by the pirates, until the arrival of the Romans in the 2nd century A.D. In the 3rd century pirate attacks brought impoverishment. In the Middle Ages, Venetians, Genoese and Rhodians built fortresses along the coast. And finally by the 15th century Olympus had been abandoned after the arrival of the Ottomans.

The site is fascinating, not just for its ruins that are fragmentary and widely scattered amidst the thick greenery of wild grapevines, flowering oleander, bay trees, wild figs and pines, but for its archeological site just inland from a beautiful beach along the course of a stream (Akcay river) which runs through a rocky gorge