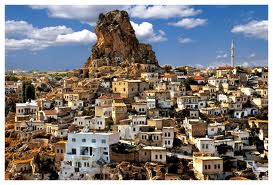 Ortahisar means "middle castle," and as its name implies, it is central among the Cappadocian towns of Goreme, Urgup, Uchisar and Nevsehir, and only a few kilometers from the Goreme Open Air Museum. When entering the town, you will notice doors in the rock surfaces on both sides. These doors are the best example of the cool-air storages in Cappadocia. In these natural air-conditioned rooms, lemons and oranges from the Mediterranean region, apples from Nigde, local potatoes, quinces and onions are stored. Green lemons slowly turn yellow in these store-rooms.

Ortahisar is famous for its friendly inhabitants, picturesque stone houses, narrow streets and lovely churches as well as the castle-like rock formation after which the town is named. This 90m high natural fortress, a prominent landmark in the region – honeycombed with caves and tunnels, camouflaged by nature without the slightest indication of human presence inside – has partly crumbled away revealing some of its interior. Today it has been restored and the peak is accessible by a staircase. The Ortahisar Castle offers a magnificent panorama over the fairy chimneys of Hallacdere and the snowy peak of Mt. Erciyes.

If you follow the street close to the main fortress, you can visit Ali Reis Church with Christ on the main dome. If you keep on the main street down south you can see the Balkan Deresi up to the Balkan Churches. Some churches in the vicinity of Ortahisar have been opened recently. Keep right for 2 km when leaving Urgup towards Mustafapasa (Sinasos), after 1 km you will see the yellow signs for the Sarica Church and the Kepez Church. Another kilometer will take you to Pancarlik Church in Pancarlik Valley, which has very fine frescoes on its ceiling.

The Hallacdere monastic complex (also known as Hospital Monastery) 1 km northeast of Ortahisar is one of the best examples of the courtyard monasteries. It has vestibule, a kitchen, a large tomb chamber, five rooms of different sizes and a church with an inscribed-cross plan with four columns. The animal-head decoration on column capitals and the sculpture of a human figure on the wall are unique in Cappadocia. The ground level inside the complex is more than one meter below that of the courtyard level because of the silting.