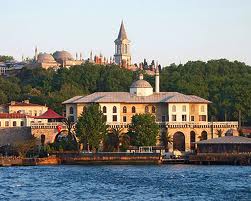 Topkapi Palace, on the Seraglio Peninsula, became a museum in 1924. The Harem, Baghdat Pavilion, Revan Pavilion, Sofa Pavilion, and the Audience Chamber distinguish themselves with their architectural assets, while other artifacts reflect palace life. Gülhane Park is located on the slopes below Topkapi Palace extending to the seashore, and is popular among Istanbul residents for picnicking and open-air concerts. In the park is the Gothic Column, known to have been one of the main obelisks of the Byzantines, and an as yet unclassified, and therefore unofficial, Byzantine ruin. Topkapi palace is a place which we will visit in our Fullday istanbul historical site tour

Collections of the Topkapi Palace Museum and th Breguet Museum are meeting for the first time at the Istanbul European Capital of Culture."Ottoman Collection" of legendary Breguet clocks that ornaments the Ottoman and European Palaces are being exhibited for the first time at the Topkapı Palace Museum. , there is the clock known as the masterpiece of the world clocks named "Pendule Sympathique" among the masterpieces of the exhibition. Also in the exhibiton, there is the Sultan Portraits of the period and letters written between Seyid Ali Efendi who is the first Paris ambassador and Breguet.

In the exhibition called “Russia in the Otoman Palace” , Ottoman objects at  Russia and Russian objects at Otoman Palaces which some part of them have been presented to be visited at the exhibiton “Treasures of the Moscow Kremlin at the Topkapı Palace” are being together at the same place for the first time. These exhibitions which are indicators of the diplomatic and commercial relationships between two countries are also show the interaction of the culture and art

Daylight-saving time is going to be implemented in the Topkapı Palace Museum at the date Thursday the 15th, April 2010 which is the starting date for the “Tourism Week” that being celebrated every year. The Topkapı Palace Museum will be open to visit between the times 09:00 AM – 07:00 PM except tuesdays during the daylight saving time. Detailed information about this implementation can be found by clicking the "continue" link below.