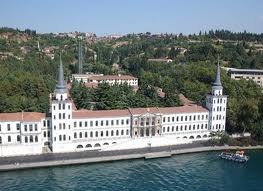 Relatively unknown to tourists, the suburb of Üsküdar, on the Asian side of the İstanbul strait, is one of the most attractive suburbs. Religiously conservative in its background, it has a tranquil atmosphere and some fine examples of imperial and domestic architecture.

The iskele, or Mihrimah Mosgue is opposite the main ferry pier, on a high platform with a big covered porch in front, often occupied by older local men watching life around them. Opposite this is Yeni Valide Mosgue, built in 1710, and the Valide Sultan’s green tomb rather like a giant birdcage. The Çinili Mosque takes its name from the beautiful tiles which decorate the interior, and was built in 1640.

Apart from places of religious interest, Üsküdar is also well known as a shopping area, with old market streets selling traditional local products, and a good fleamarket with second hand furniture. There are plenty of good restaurants and cafes with a great views of the İstanbul strait and the rest of the city, along the quayside. In the direction of Haydarpaşa is the Karaca Ahmet Cemetery, which is the largest Muslim graveyard in İstanbul. The front of the Çamlıca hills lie at the ridge of area and also offer great panoramic views of the islands and river.